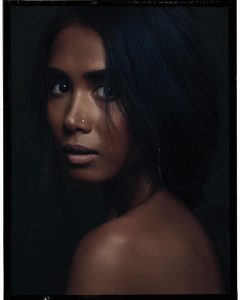 Char serves as the founder of nonprofit GOOD TO BE GOOD: a grassroots, community-led humanitarian and advocacy organization serving diverse, underserved and marginalized women, girls, gender diverse-folks and their communities while actively advocating for gender equity and issues affecting made-vulnerable populations. The nonprofit’s mission-focused initiatives mobilize critical funds and awareness, which invest in social services and community-focused programming. She has led projects and campaigns focused on building solidarity and empowerment through bottom-up approaches and mobilization. As a committed leader and student of life, Char demonstrates an aptitude for visionary thinking and compassionate, values-driven leadership—the kind responsible for driving connection-centred service while cultivating effective and meaningful environments for people.

Char’s advocacy supports communities in addressing socioeconomic disparities, building a kinder and equitable society, and advancing the empowerment and rights of women and girls who have experienced gender-based violence, systemic inequities and injustices.

Char is a voracious entrepreneur and a self-avowed polymath, weaving personal wisdom, contemplation, and lived experience into her work. Her media work has been featured in various publications such as HuffPost, FLARE, Toronto Star, TIME, CTV, Global News, CP24, Globe and Mail, Vogue Italia. Over the years, she has collaborated with local and major brands including PANGAIA, Cannes Lions, The Drake Hotel, bluboho, Healthy Planet, FARFETCH. With a colourful background that spans social service, music, fashion, film, and wellness, Char’s inspirations are wide-ranging, but all driven by the same ethos—to radically support others; to be of service; to be rooted in the value of love (aloha).

A writer at heart, she pens think pieces on intersectional feminism, ecological sustainability, human rights, interconnectedness, spirituality, connection, and inquiry that link love and justice across her online channels. Her writing is influenced by her interdisciplinary studies and zest for poetry, feminist and liberationist traditions, epistemology, care ethics, spiritual teachings, and general social science literature.

Hailing from Rexdale, Char currently resides in what is known as Toronto, where she volunteers and consults nonprofits such as Sistering’s social enterprise SpunStudio, Women’s Habitat, and Dixon Hall’s Out Of The Cold program. She also serves on the Board of Directors of Youth Rising Above—a charitable organization whose mission is to help transform the lives of youth and young people in marginalized communities.

Where I create, there I am true.

Every effort has been made to ensure that all non-original content contained within www.charsanpedro.com is used within the parameters outlined by the copyright holders. Please direct any questions or concerns related to intellectual property to [email protected]

These guys sure do: https://www.youtube.com/watch?v=Qj324R9R_NQ&feature=youtu.be (Warning. Some explicit content!)

While you’re there, check this one out too: https://www.youtube.com/watch?v=wZcUrWAK-8Q (Sorry!)

Don’t like what you see, do ya? After all, you’ve been brainwashed by the dairy industry’s propaganda to believe that the main source of calcium is by consuming milk (and milk products) and by drinking the recommended glass of it a day (or 3 according to the USDA), you’ll grow up to have strong, healthy bones.

The meat industry has been under some major scrutiny (and for good reasons) for their colossal factory farm system and practices of raising cattle in immoral confinement, yet the animals in the dairy industry are arguably just as guilty. In their haste to sell you their products, the dairy industry has created an obsession over the importance of dairy products (also known as liquid meat) which in reality does more harm to the body and our planet than good.

There has been extensive scientific studies on the many harmful cumulative effects of consuming AND producing dairy – whether organic or not. In actuality, there is no reason for us to consume cow’s milk—and there are a host of important reasons to avoid it. Here are some that I’ve gathered for you to help you pass up that glass of cow’s milk:

2) Calcium may (or does) raise cancer risk. Some studies have proved that with higher intakes of both calcium and dairy products can potentially increase a man’s risk of prostate cancer by 30 to 50 percent. Dairy product consumption increases levels of insulin-like growth factor I (IGF-1) in the bloodstream. IGF-1 is a potent stimulus for cancer cell growth. High IGF-1 levels are linked to increased risk of prostate cancer and breast cancer. Nowadays, milking cows are given antibiotics and most are also injected with a genetically engineered form of bovine growth hormone (rBGH). A man-made or synthetic hormone used to artificially increase milk production, rBGH also increases blood levels of the insulin-growth factor 1 (IGF-1) in those who drink it.

3) Not everyone can stomach dairy. Approximately 75 percent of the world’s population is genetically unable to properly digest milk and other dairy products — a problem called lactose intolerance. You may not show the common symptoms, but try taking it out of your diet and see what happens! 😉

4) Adding dairy foods to your diet would only supply more calories, fat, animal protein, cholesterol, sodium, microbes, and chemical contamination—ingredients that may contribute to even more health problems and trigger inflammation such as allergies, sinus problems, diabetes, chronic constipation, asthma, autism, skin issues such as eczema and irritable bowel syndrome.

5)  Amy Lanou Ph.D., nutrition director for the Physicians Committee for Responsible Medicine states, “The countries with the highest rates of osteoporosis are the ones where people drink the most milk and have the most calcium in their diets. The connection between calcium consumption and bone health is actually very weak, and the connection between dairy consumption and bone health is almost nonexistent.”

6) Milk is a very strong earth pollutant: it is about 400 times more polluting than untreated sewage. To put it another way, 1,000 gallons of milk has the same polluting potential as the untreated sewage from a town of 7,000 people.

7) So yes, dairy farms and factories pollute the earth and also accountable for the huge amounts of CO2 emissions, land degradation, water consumption and water contamination. They also contribute to the slaughter of more than 250,000 dairy cows per year.

8) ALL cow’s milk (regular and ‘organic’) has 59 active hormones, scores of allergens, fat and cholesterol that either occur within the milk naturally as the cow develops it OR it has synthetically been injected into them. Most cow’s milk has measurable quantities of herbicides, pesticides, dioxins (up to 200 times the safe levels) and up to 52 powerful antibiotics. Milk also contains blood, pus (about 750 million pus cells allowed by the FDA), feces, bacteria, viruses and traces of anything (both toxic and non) the cow eats too. Yes, while some raw, whole, organic milk eliminates concerns like pesticides, hormones, antibiotics, and the effects of homogenization and pasteurization — but these benefits don’t outweigh dairy’s potential health risks overall.

9) The amount of money the government spends to promote the dairy industry is roughly 550 million just in America alone! Each marketing buck spent boosts sales by an average of $8, for an annual total of an extra $4.6 billion in government-backed sales of meat, dairy, and eggs. If that wasn’t enough, the U.S. government also spends on average more than $30 billion in subsidies for animal products such as dairy, and only a fraction of a fraction of that much on fruits and vegetables. That’s just sad. In addition, some of the “experts” who have helped create the recommended food pyramid actually work for the dairy industry, which makes the US Department of agriculture’s recommendations reflect industry interests (aka money), not science or the public’s best interests.

10) The life of a Western cow ain’t a pleasant one. While female calves are slaughtered or kept alive to produce milk, male calves are often taken away from their mothers when they are as young as 1 day old to be chained in tiny stalls for three to 18 weeks. Male calves, who cannot be raised to themselves become dairy cows, are slaughtered early on in life for veal. The dairy industry is the backbone of the veal industry – without it, the routine slaughter of calves could not continue. Just like veal calves, dairy cows who cannot produce milk due to exhaustion or disease are of no use to the dairy industry. Instead of “wasting resources” (feeding, sheltering), these cows are transported to factory farm feeding facilities to be fattened up, then slaughtered for meat.

One of the best methods to battle practices you don’t support is to vote with your dollars. Or as I’d like to say, “Vote with your fork!” Opting out from dairy altogether is definitely an ideal option and it’s a lot easier than you think. Nowadays, you can almost always find milk alternatives in your grocery aisle. You can choose from a number of delicious non dairy alternatives such as almond milk, hemp milk, organic soy milk and rice milk. Or – make your own! Be your own almond milk man. Don’t eat meat but can’t live without cheese or butter? Try making your own homemade cheese made from nuts like cashews and almonds. Rather than slathering your food with salty butter, try going for organic virgin coconut oil!

What about calcium and the benefits of milk we’re told are good for us? While calcium is a necessary nutrient, we can easily get enough of it from plant based foods. The most healthful sources of this vitamin can be obtained from eating green leafy vegetables and legumes, beans, seaweed and nuts. You don’t need to rely on dairy for healthy bones either. If you want strong, healthy bones, getting plenty of exercise and vitamin D (about 2000 IU or more depending) daily is key. Remember, dairy is not vital for good health nor is it sustainable.

Go dairy free and see what it can potentially and positively do for you. Trade in that glass of chocolate milk you crave in the morning and instead opt for a delicious vegan cinnamon roll protein milk beverage that’s nutrient dense, immune boosting and cruelty free. And then if someone throws a “Got milk?” at you (whether in a paid advertisement or from someone who wants it for breakfast) smile and let them know that you know better! 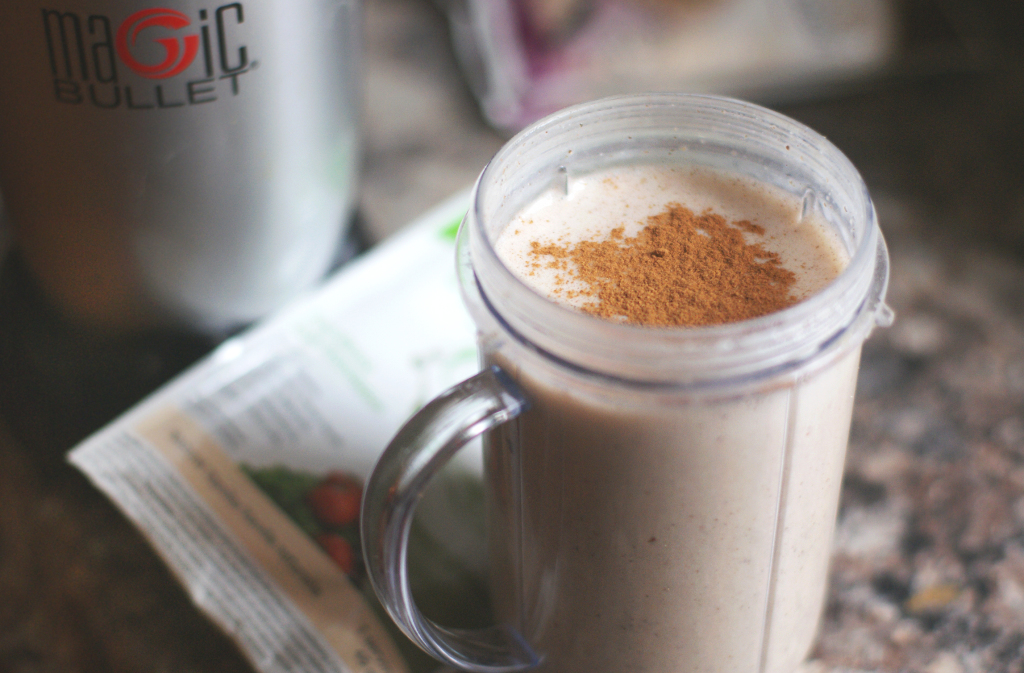 1.5 cups of unsweetened vanilla almond milk (homemade or an organic brand of your choice – always unsweetened!)

Optional: pinch of stevia to taste (my protein powder usually contains some so I usually leave this out)

Add all ingredients to your Magic Bullet or high speed blender and blend until smooth. Garnish with more cinnamon if desired. Enjoy! x